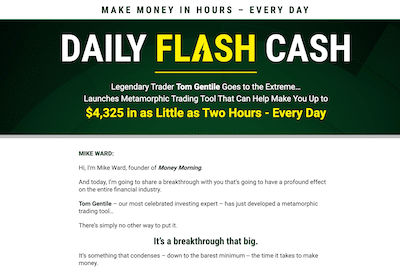 Today I’m reviewing Tom Gentile’s Daily Flash Cash, which he claims is so lucrative it can make you over $4,000 in only two hours.

But is it legit, or just another scam?

Expert day trader Tom Gentile’s subscription-based newsletter Daily Flash Cash gives you options trade recommendations every day that are based on his tool called the “money dial” and a new technology called a “time contingency order.” I don’t believe it’s a scam, but making $4K in 2 hours is a bold claim.

Now let’s take a closer look at what the Daily Flash Cash recommendations are based on, how it all works, how much it costs, if it’s worth it, and more.

What’s Daily Flash Cash All About?

Tom Gentile’s Daily Flash Cash is a self-proclaimed “trading research service” that costs $5,000 per year and gives you recommendations for options trades.

Those trade recommendations are based off of two things:

Let’s take a closer look at each of those aspects.

It’s basically a series of dials and time sequences that were created by a team of twelve software engineers who once were from:

Every dial does one thing: identifies what Gentile calls “flashpatterns” in different stocks.

A flashpattern is something that happens when a certain stock makes the same move (like jumping up) at the same time interval nearly every day.

They’re different than regular stock patterns because they occur over short periods of time (like a few hours) as opposed to days or weeks.

He also lets you know that this is the first tool he’s created that gives his readers the option to make money every day.

The way this “money dial” works is by recording a company’s tick data over the course of weeks or even months, aggregates it, sorts it, and then identifies the patterns from it.

He says he won’t recommend trades that don’t have flashpatterns with an accuracy rate less than 80%.

For example, say a stock regularly jumps in price from 1:00 p.m. to 2:00 p.m. nearly every day over the last 20 days. That’s a flashpattern, and as long as it’s gone up during those times more than 16 of the last 20 days, he might recommend it.

And because stocks generally go up so little in such a short amount of time, he doesn’t recommend investing in the stock itself, but rather in options trades.

That way the gains can be leveraged, supposedly turning a $0.20 increase in stock into a double- or triple-digit gain for you.

And if you’re wondering, there are three key things that go into which option contracts he’d recommend. Those are:

While this new tool might be helpful for identifying certain patterns, and his own expertise might be useful for knowing which contracts are better to invest in, he needs something else to use in conjunction with this knowledge.

Since options contracts generally last anywhere from 30-90 days, it would seem impossible to earn money within a matter of hours, as Gentile claims.

However, there’s a new thing called “Time Contingency” orders that have been embedded in approximately 90% of U.S. brokerages and trading platforms, such as:

These orders allow you to dictate when and for how long you want your money to be active in any given trade – down to the exact minute each day – even before the market opens.

This is how you’re able to trade options during specific time intervals – and it’s also how he can promise that you have the chance to earn over $4,000 in only a couple hours and almost entirely remove the aspect of time from trading.

How Does Daily Flash Cash Work?

As we’ve already stated, Daily Flash Cash is a subscription-based newsletter service that gives you the chance to earn money by following Tom Gentile’s trade recommendations.

With this subscription, you get:

And again, all of this costs a whopping $5,000 for a year’s subscription. To be fair, though, he’s known for having high-priced subscriptions, like his Money Calendar Pro newsletter.

The difference is that this one does not offer a money-back guarantee – it explicitly states that it’s nonrefundable.

The only “guarantee” that comes with it is a promise to give you another year’s subscription for free if you aren’t provided with one opportunity to double your money each day (on average).

Who Is Tom Gentile?

Tom Gentile is a pattern trader, also known as a day trader. And, according to his page on Money Map Press, he’s the “number one” day trader in the U.S.

That means that he’s an expert in making short-term trades on a daily basis, and he’s been doing it since the 1980’s.

He essentially taught himself everything he knows – he doesn’t have any formal business training behind him. He’s simply learned from other big guys in the industry.

His success really started to unfold beginning in the 90’s, when he co-founded a company called Optionetics, which was acquired by optionsXpress and eventually sold to mega-company Charles Schwab.

He also published multiple newsletter services through the publishing company Money Map Press. Some of those include:

So, it’s safe to say that he has a strong track record behind him and seems to know what he’s talking about.

In the end, Tom Gentile is an expert in day trading and options trades, so it wouldn’t hurt to get advice from him. Although I personally wouldn’t subscribe to it with a $5,000 price tag and no refund policy.

He has other, cheaper newsletter options that might be a better way to get your foot in the door – he even has a free newsletter that you might want to check out first before you spend any money to see if this is really for you.

Hello and welcome to my site!

I’m Tim, a 30 something guy who went from construction worker to creating a 6 figure online business in a few short years. I started this site out of a passion to help others avoid scams and learn how to create real success online. See my full story here.

Tools and Resources I Use to Build My Online Business

How to Make Money Posting Ads for Companies Online

12 Legit Ways to Turn Your Boredom Into Cash Online