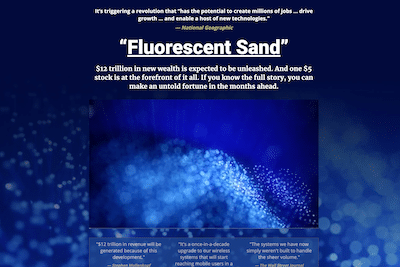 It seems like people are always looking for a good bargain when it comes to stocks – and who can blame them? Buying a cheap stock now could pay off big time down the road, if you know which stocks to pick.

And that’s where guys like Ian King come into the picture. He says that $12 trillion in new wealth is expected to be unleashed in the months ahead, and that his $5 “fluorescent sand” stock pick could make you a fortune.

Sounds good, but what is it, and is it legit?

Fluorescent sand is a term coined by Ian King that describes the underground fiber optic network, which he believes is key to the upcoming 5G revolution. It’s not a scam, but he is using this to pitch his newsletter, Automatic Fortunes, where he reveals the $5 stock that he says is leading this revolution.

Let’s take a closer look at what fluorescent sand is, why it’s called that, what the mysterious $5 stock is, whether or not you should invest in it, and more!

Fluorescent sand is, in short, a term coined by investor Ian King that refers to the fiber optic network that’s supposedly needed for the next big technological revolution.

But why on earth does he call it “fluorescent sand”?

So, when Ian refers to “sand that lights up and powers things”, he’s simply talking about thin fiber optic cables that use light to transmit data at incredibly fast speeds.

And just like how Matt McCall claimed that 5G was the keystone that would lead to the fruition of disruptive technologies like self-driving cars and artificial intelligence; King believes that a certain device is going to be the key to the widespread fruition of 5G.

Because of this, he sees a giant opportunity.

Basically, he claims that there’s a problem in the tech space right now: there’s an unprecedented number of new devices coming online (we’re talking billions), and the theory is that the current system won’t be able to properly handle those kinds of numbers.

However, King claims that the fiber optic network – what he calls fluorescent sand – is the system that can handle a major uptick in online devices.

So, the underlying concept seems really similar to Jeff Yastine’s Hypernet idea – there needs to be something in place for 5G (and everything that will come from that) to be able to roll out.

In the video presentation, King claims that there’s a lot of “dormant” fiber optic cables whose usage rights can be purchased – and that’s apparently just what certain companies are doing.

Companies are investing a ton of money into these fiber optic networks, such as:

And that’s all just to show that major companies are preparing to rely on 5G and thus these fiber optic cables that are already in place underground.

But there’s still a problem: even though the fiber optic network is designed to handle 5G, King assumes that the cell towers aren’t.

What he’s actually suggesting is that the keystone in all of this is the device that links the 5G wireless network and the underground fiber optic network.

There’s a company that’s created a device about the size of a thermostat. It’s not meant to be used in place of cell towers – which transmit data over long distances – but rather used in conjunction with them.

Major companies have already been grabbing positions in this company, like:

So, how do you get in on what this company is?

He tells you in his research briefing called “The $5 Stock Leading the 5G Revolution,” which you can get for free – if you pay to join his Automatic Fortunes membership.

So, after a nearly hour long video, the truth comes out: this is all just a big sales pitch.

This is a common marketing tactic, as shown by things like McCall’s Green Monday presentation or Paul Mampill’s America 2.0 pitch.

But if you’re wondering what the company is, most speculate that it’s Inseego, because it matches up most closely with all the hints he gave in the video. Although, full disclaimer, I haven’t read his report and I can’t say for certain if that’s right or not.

What Is Automatic Fortunes?

Ian King’s subscription service is called Automatic Fortunes, which is primarily a newsletter subscription with a few added bonuses.

Plus, you also get a few “free” bonuses:

So, as we can see, the “free” bonus is what they actually used as a sales pitch to draw you in to their whole subscription service.

There’s three subscription tiers you can choose from:

Ian King is the guy behind fluorescent sand and Automatic Fortunes, and who has over 20 years experience in the investing world.

He started out working at Salomon Brothers. In this presentation, he went on to say how he moved up and went on to analyze multi-million dollar investments for well-known company Citigroup (better known as Citi bank).

He’s written for Investopedia and his insights have been shared on Fox, among with many other well-known media outlets.

He has a strong track record, such as:

So, it’s honestly safe to say that he knows what he’s doing when it comes to investing.

Banyan Hill is the company behind Ian King – the one who published his newsletter services. They’re behind a lot of other big names, like Jeff Yastine and Paul Mampilly. They’ve been around for a long time and claim to have a lot of strong analysts forming their expert team.

Can You Make Real Money With Fluorescent Sand?

The real question would be: can you make money investing in stocks related to 5G? Because that’s what the core company King is advising you to invest in is related to.

The answer to that question is up for debate. Some people say we’re on the brink of a technological revolution – and 5G technology has always been at the forefront of people’s minds whenever you say that.

However, we’ve all heard of big promises – think things like 3D printers – that were supposed to blow up and make people tons of money, but nothing major ever actually came from them.

Plus, some of the promises made in King’s presentation (like being able to make quadruple digit gains) seems to be a bit far-fetched in my opinion.

So, there’s no real way to know for sure whether this is the way to make money. The stock market is risky and volatile, and no one can predict what will happen with 100% accuracy.

At the end of the day, I think it’s smart to turn to experts who have experience in investing, like Ian King – especially when you don’t know exactly where the best places to put your money might be.

That being said, I don’t think anyone can predict the stock market with 100% accuracy. It’s always a good idea to not risk more than you can reasonably afford to lose.

Whether or not you end up subscribing to King’s newsletter or not is a personal choice, but hopefully you found this review helpful!

1 thought on “Is Fluorescent Sand a Legit $5 Stock or Scam?”