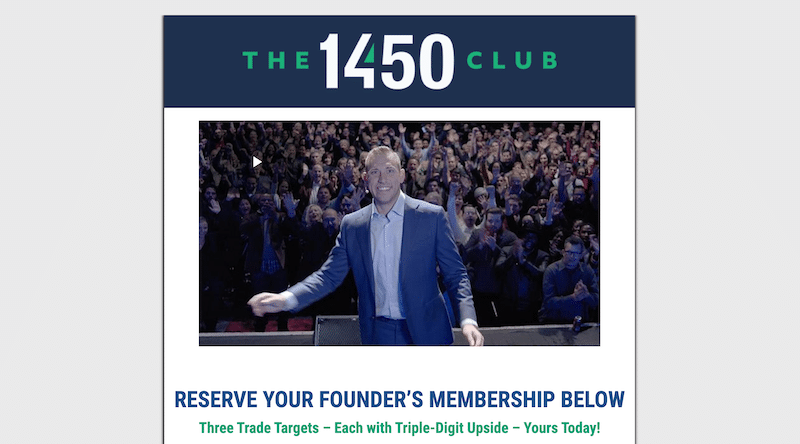 I discovered “The 1450 Club” today while browsing the Money Map Press website. The guy behind it, Andrew Keene, says you could use what he shares in his club to 50x your net worth in just 1 hour per day.

Sounds cool, but is it legit?

The 1450 Club isn’t a scam, it’s a financial subscription service that gives you access to Andrew’s triple-digit options trade recommendations, which are based on his proprietary algorithm called S.C.A.N. But it does cost $5,000 per year, and there’s risk involved.

Let’s take a closer look at what this “club” is all about, who created it, and how it works, to give you a better idea on what to expect before joining.

The Transform Your Life Summit

The Transform Your Life Summit is an event that was held by Andrew Keene. And the transcript of that event is now being used to sell The 1450 Club.

It’s basically a discussion between the interviewer (Megan), some audience members, and Andrew himself. Andrew talks about how he went from millionaire to broke a while back. Then, after developing a special algorithm, turned $100K into $5 million in less than two years.

The reason they call it the “Transform Your Life Summit” is because Andrew was able to transform his life, and says he can help you do the same. Specifically, he says that The 1450 Club membership can help you 50X your net worth in just 1 hour per day, 4 days per week.

The 1450 Club is a subscription service provided by Andrew Keene and the company he works with, Money Map Press, LLC. For $5,000 per year, members get access to Keene’s options trade recommendations.

But not just any old trades. Every trade he gives you is supposedly based on a proprietary algorithm he developed called S.C.A.N. Which basically looks at the millions of trades that take place each day on Wall Street, and finds “hidden opportunities” to profit.

He says that, out of 6,244,208,455 trades that take place each day, S.C.A.N detects small groups of potential insiders making mysterious trades. Which is another way of saying, it’s about spying on potential insider trading as a way to profit.

Insider trading is where people use nonpublic information about the company, to place winning trades. It’s about as close to a “sure thing” as there is when it comes to trading, but it’s not easy information to come by. Only people who are closely connected to the company have access to this inside information.

And according to Andrew Keene, that’s where S.C.A.N comes into play. He says it actively searches the market for what it determines could be insider trades, vets them, and shows him which trades to place.

He then shares this information with members of The 1450 Club. So that they can make 50x their net worth with triple-digit gains.

To be clear, you’re not actually getting access to this software yourself. You are essentially trusting that Andrew is sharing the information he receives from his so called S.C.A.N algorithm with you as a member of the club.

Andrew Keene is the creator of The 1450 Club. And Money Map Press is the company he works with, that actually sells the membership.

According to Keene’s Money Map Press profile, he was one of the biggest market makers at the Chicago Board Options Exchange (CBOE). Which is the world’s largest options market, so that’s no small achievement.

Apparently, he was a multimillionaire before he hit 30, but lost everything within a few short months. Which led him to a Buddhist temple in Thailand, where he came up with the idea for S.C.A.N.

He would basically find these insider trades with S.C.A.N and place a series of small options trades that produced high percentage gains. And now that he’s used it to make lots of money, he’s sharing it with anyone willing to shell out $5K for it.

What is Money Map Press?

Money Map Press, LLC is an investment site that provides people with various newsletters and subscriptions to programs, like this one. And many other subscriptions developed by other financial gurus like Tom Gentile and Michael Robinson for example.

So if you join The 1450 Club, you’re actually buying from Money Map Press. Even though it was put together by Andrew Keene.

In order to get started, you first need to sign up with The 1450 Club. Which is as simple as visiting the Money Map Press website, clicking on Andrew Keene’s profile image, then clicking on the link to 1450 Club:

As a member, you get access to triple-digital options trade recommendations, which are based on the S.C.A.N algorithm.

And this information is given to members through the Virtual Trading Room (webinar), which only members have access to. Every Monday to Thursday between 9:30 a.m. to 10:30 a.m., club members sign in to this hour long event where Andrew shows you exactly which 3 trades he’s placing that day.

So you get access to 3 trade opportunities per day, Monday to Thursday.

Here’s an overview of how S.C.A.N works:

The first step is all about spotting the trades that could be insiders trading on a “sure thing”. The second step is where the algorithm uses the Ichimoku Cloud to predict how much momentum the stock has. The third step is about placing the trade. And the fourth step is where you (hopefully) profit.

In addition, members also get access to the Fast Track to Financial Freedom training videos. Which are a series of videos that teach you the basics of options trading. As well as text message alerts when trades come available, and an annual members-only retreat (which costs extra).

Andrew Keene is a legitimate options trader with a proven track record of success. And Money Map Press is a real company that provides quality investment advisory services.

So you could potentially make a decent sum of money as a member, assuming Andrew’s recommendations are as amazing as he says they are.

With that being said, the price is definitely up there. I mean $5,000 is a lot of money to pay for something that you can’t even test out first. There is a money back guarantee in place, but it’s not really worth much if you ask me.

Why? Because if you look closely, it says you can get your money back after one full year, only if they didn’t give you all the trade recommendations they promised. Which of course they will.

But there’s no guarantee as to the quality of the service.

The other important point I want to bring out is that just because some financial guru says he’s making “triple-digit windfalls”, doesn’t mean the average person can expect these results.

Like any type of trading, you are risking your money by following someone’s advice. And there are no guarantees of success. So you should probably only risk what you’re willing to lose.

Overall, I think this could be a worthwhile membership for the right person. As in, someone who trusts Andrew Keene enough to risk $5K and who has a decent bankroll to put into this.

But I probably would take some of the claims made on the sales page with a grain of salt. And I definitely wouldn’t go into this expecting to get rich overnight.

Like most investment memberships I review, like Alpha-9 Trader, Fast Fortune Club, and Carbon Web for example, they make some pretty bold claims in the sales copy. So I think it’s worth exercising some caution here.

What Is The 1450 Club About?
The 1450 Club is a subscription that gives members access to trade recommendations based on potential insider trades identified by the proprietary S.C.A.N algorithm.

How Does It Work?
Members get access to 3 new “triple-digit” trade recommendations every Monday to Thursday, via the Virtual Trading Room. Which they can then use to make money buying and selling options contracts.

Who’s Behind It?
Andrew Keene is the creator of The 1450 Club. And Money Map Press is the company he works with, that actually sells the membership.

Is It Legit?
I don’t believe The 1450 Club is a scam. But it is also something I am hesitant to recommend given the price of the membership, the refund policy, and the hype in the sales letter.

Hello and welcome to my site!

I’m Tim, a 30 something guy who went from construction worker to creating a 6 figure online business in a few short years. I started this site out of a passion to help others avoid scams and learn how to create real success online. See my full story here.

The 1450 Club is a $5,000 per year trading service run by Andrew Keene that shows you how to make money with options trading, with the help of his unique S.C.A.N algorithm.

It’s not a scam, but I personally think this type of investing can be quite risky, so I don’t really endorse it either.

There’s really only ONE program I truly recommend. It helped me go from $0 to generating over $10K per month in passive online income, and you can see exactly how I did it in this free training: