American taxpayers are sharing in $34.6 billion worth of ‘Freedom Checks’. All you need to do is signup, and with just ten bucks you can start cashing in FAT checks!

Thankfully, you’re smart enough to be here doing your homework though. Because Matt Badiali is NOT telling you the full story. Not by a long shot.

I first came across Matt Badiali’s Freedom Checks via an article on the Banyan Hill website. The article appears to be an “update” on how much money people are making with this…

Apparently, people are making so much money it’s like winning the lottery.

But the truth is- this is an advertorial. Which, in the world of marketing, is code for bullshit.

The above article exists for the sole purpose of promoting something. And as I will soon explain, that “something” is a Real Wealth Strategist subscription.

Anyways, that article links to a video featuring Matt Badiali…

In this video, Matt introduces himself and starts pitching the idea of “Freedom Checks”.

He claims that 568 ‘designated entities’ will soon pay out $34.6 billion to American taxpayers in the form of ‘US freedom checks’.

He says that residents in the United States can easily begin collecting checks for $24,075, $66,570 and $160,923 with this. According to the video, all you need to do is signup and start cashing checks.

Matt goes on to show testimonial after testimonial. There must be dozens of testimonials throughout the video, all supposedly from real people making real money. 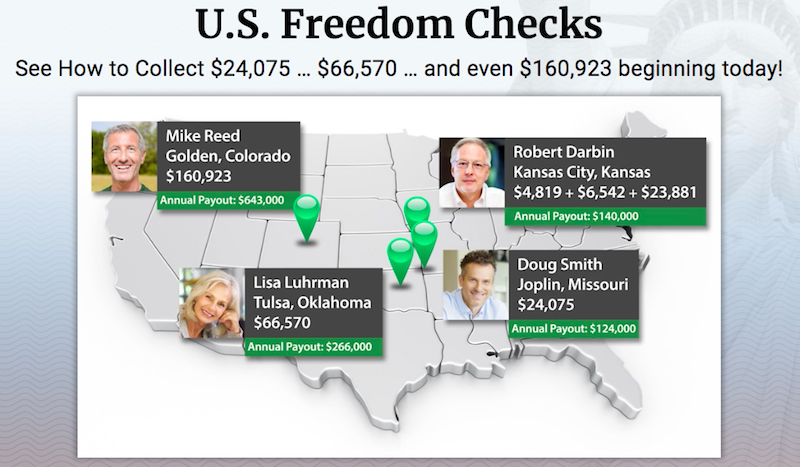 Unfortunately, there’s some serious holes in his story though.

For starters, these people are really just stock photos… 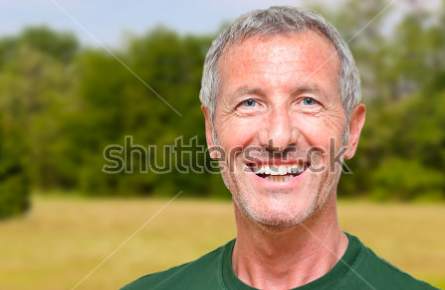 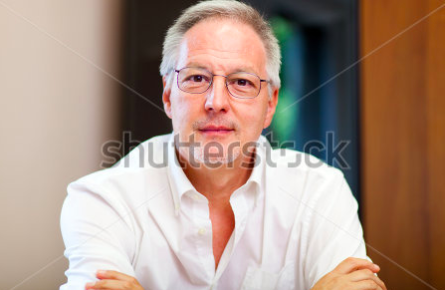 I won’t go through each and every testimonial, but my guess is that they’re ALL fake. I see this kind of thing a lot among scam sites and (in my opinion) it’s highly unethical.

If REAL people are making real money- why use stock photos?

Anyway, more important are the amounts they claim to be earning. For people to be earning such high amounts of money this way, they’d need to be investing millions of dollars.

Seriously. This is the only way you can make such high returns with the methods he’s referring to. And I intend to prove this beyond any shadow of doubt.

Read on to see what these ‘freedom checks’ are and how they really work.

Recommended: Go here for my no. 1 recommended stock picking service

What Is Freedom Checks? (not what you think)

Freedom Checks is a term Matt Badialia created out of thin air- which really means investing in MLP companies. An MLP (Master Limited Partnership) is a unique company structure that pays investors a monthly, or quarterly return on investment.

This is a legitimate investment strategy.

But it’s NOT for everyday investors with ‘ten bucks’ to spare. Not by a long shot. To make real money this way requires a significant amount of capital.

Surprisingly, I was able to find the official eight page PDF that explains the process and the MLP companies Matt recommends investing in.

I literally found it through a quick Google search.

This is the “$34.6 billion freedom check payout” he’s talking about. If you read that and are wondering what the fuss is all about- you’re not alone.

Anyways, the only way you can get this (other than being here now) is by purchasing a yearly subscription for “Real Wealth Strategist”.

Which means Freedom Checks is really just an elaborate sales pitch to lure people into buying Real Wealth Strategist. It comes as ‘part’ of your yearly subscription to RWS…

So it’s safe to say you can disregard most of what is said in the sales pitch. It’s nothing more than a sneaky ‘gimmick’ to sell you into a subscription. And teach you a (not secret) method of investing.

Recommended: Go here to see my #1 rated stock advisory of 2022

First and foremost, this is about investing in MLP companies. Which is all about buying ‘units’ of a given company and receiving an annual yield (ROI) based on the companies performance.

So you are becoming a ‘unitholder’ (AKA shareholder) of a given company in the hopes they will perform well.

This is very similar to how stock dividends work. Where you’re buying shares of a company in the hopes of earning stock dividends. Except there are certain tax advantages and other differences with this model.

Anyway, these companies distribute at least 90% of their total revenue to investors. And they don’t pay tax like most companies either. Nor do the investors who receive this income. Income tax on these earnings is only payable upon selling any shares you own.

Assuming you’ve got a handle on the basics, the important thing is to pick the right companies to invest in. At least, if you want to make a good profit. And this is where Matt’s ‘freedom check blueprint’ comes into play.

These are companies that apparently own or control over a billion dollars in raw materials. Specifically, natural resources such as oil, gas, minerals, timber, core metals and precious metals like gold and silver.

How much do they pay investors?

The above MLP companies (typically) pay out around 5-10% of your investment per year. Which is physically paid on a monthly or quarterly basis.

This seems to be about the average returns among many MLP’s from what I can see.

Either way, none of them pay out more than 10% per year return of capital. Which is why much of the sales pitch is a complete and utter load of BS.

As you can see, ten bucks will get you NOWHERE.

And to make even a reasonable amount of money, you need substantial capital to invest. In any case, the returns on investment are nowhere near what he shows in the sales video. 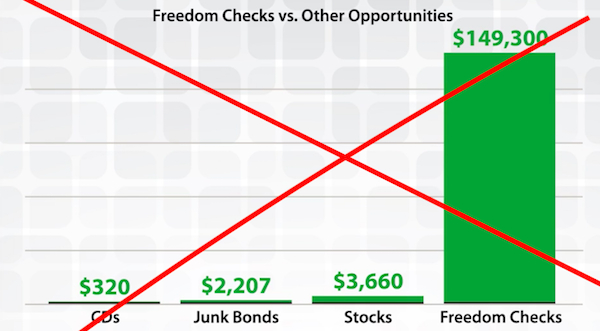 In order to make anywhere close the numbers he shows people in the sales video, you need over a million dollars to invest.

I’m sure most people have that kind of money laying around though, right?

Matt seems to think so.

Is Freedom Checks a Scam?

Freedom Checks is a scam in the way it’s marketed to people. The marketing material is full of unrealistic hype, fake testimonials, and never explains what you’re really getting into.

So in my opinion, this is grossly misleading and unethical.

As far as Matt Badiali’s Real Wealth Strategist goes, it may be worthwhile. I chose not to buy it since I don’t like being lied to like this. But it’s possible there’s some value within it’s contents. Considering it’s only 47 bucks per year I don’t think it’s a huge risk.

However, several comments I’ve come across suggest there are heavy upsells once you’re a member. Which would not surprise me considering what I’ve already seen from these people.

Investing in the way Matt suggests, with the companies he recommends, is good and well. This is a legitimate means of investing and assuming you have enough capital, there is money to be made.

As far the way it’s sold to people, that’s another story. This is a classic case of exaggerating and leaving out critical facts in an effort to make a quick 47 bucks.

Whatever you decide to do is up to you, but hopefully this sheds some light on this so you can make a more informed decision.

See next: Discover my top rated stock picking service for 2022

33 thoughts on “What Is Freedom Checks – Scam or Real Way To Profit? [Review]”

Hi, and welcome to Affiliate UNguru. I started this site after losing money to a bunch of online scams in 2015. I wanted to help others avoid the same pitfalls and find legitimate methods for earning money and creating wealth through the internet. I’ve researched 100s of stock advisories since, and there’s still only one service I recommend.

Be the first to know when we expose the latest "stock teaser" presentations.