I received an email about Digital Payday today and decided to take a closer look.

The website says you can make $,5000 within 24 hours with online ads. Which is an outrageous claim to be honest, and one that immediately made me suspicious.

Anyways, I did some digging and found that Digital Payday is a scam.

I know that’s a bold claim and I don’t expect you to take my word for it either. So in this review, I will show you exactly why I say this, so you can make your own mind up.

What Is Digital Payday About?

Digital Payday is a new site that describes itself as a “premiere money generating service”. One that “provides members with passive income through online ad revenue”.

The site (digitalpayday.co) is run by ‘Daniel Bluth’ who is apparently an online millionaire, who wants to help people make lots of money.

Sounds cool. But in reality, Digital Payday is a sales page for Clicks Dealer.

And a highly misleading sales page I might add. The video literally tells people that Mark Zuckerberg of Facebook endorses Digital Payday. Which is a blatant lie.

Anyways, I’ve actually reviewed Clicks Dealer so I know exactly what it’s all about. You can read my review (linked to above) to get the full story.

In short, Clicks Dealer is a platform that sells ad banners, that apparently earn the buyer a passive income. However, when you look into the platform in detail, it becomes obvious it’s not legitimate.

Read on to see how it works in more detail.

The website works by presenting you with (what appears to be) an exciting work from home opportunity. Where all you need to do is join, choose some ad banners, and watch the money roll in.

The site works to convince unsuspecting people, that making large sums of money will happen quickly and easily. Like most scams do.

If you put your name, email and phone number into the box, you will be sent to the Clicks Dealer website. And probably end up receiving lots of annoying SPAM from here on out too.

Anyways, once you are on the Clicks Dealer site, you will eventually learn that it costs at least $250 to get started. And it appears as though they have far more expensive memberships in place to the tune of thousands.

Not to mention, you need to purchases the ad banners themselves. Banners that supposedly provide you with a passive income, once those banners are placed on ‘third party sites’.

But there is no way to verify your ads are being shown anywhere. Not to mention, legitimate ad networks are free to join and you don’t need to buy their banners!

In any case, I do not believe anyone is making money with Clicks Dealer at all.

If they are making money (which I doubt) it’s by promoting the platform itself, because they have a referral program in place.

So to sum it up, Digital Payday works by funnelling people into Clicks Dealer. Which is an illegitimate platform that will probably end up making you nothing, and could cost you a small fortune.

The guy behind Digital Payday claims to be ‘Daniel Bluth’. Who claims he’s an “entrepreneur, self made internet millionaire, and aquarium enthusiast”…

He also claims to have “discovered the secret behind Facebook and Google’s success, and that anyone can copy it”.

His story is fake too, because this has nothing to do with Facebook or Google. This is nothing more than a sales pitch to add credibility to the fake story.

Also worth mentioning is that the website uses an anonymous domain registration. Which means (just like the Clicks Dealer site) the real people running this scam are hiding behind fake personas.

So we have no idea who they really are.

The Testimonials Are FAKE

One of the most common scam warning signs I see, are sites using fake testimonials. They do this to add credibility to the program.

Because surely if others are making money, you can too, right?

Well in this case, as with most scams online, the testimonials are fake.

Take this woman for example, who says she makes tons of money with Digital Payday:

In the video, she says “I just sit and click refresh and the money grows in my account”. Which is an outright lie. Because here she is selling her acting services on Fiverr:

This is a site where you can literally buy a fake video testimonial for five bucks. I didn’t check all of them, but if a site does this once chances are they’re all fake.

If people really are making such good money, why do they need to buy fake testimonials?

Why Digital Payday Is a Scam

In my opinion, Digital Payday is a scam because it misleads people into thinking they will make tens of thousands of dollars per month, doing practically nothing. And within a very short period of joining.

This is the very definition of “get rich quick” hype.

The site uses unrealistic income claims, fake testimonials and practically every trick in the book to trick people into buying. 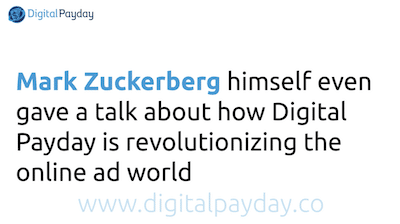 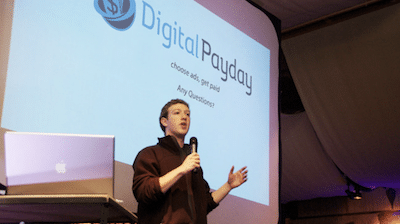 This is 100% bullshit and proof alone that this is a scam.

They’ve literally just ‘photoshopped’ the Digital Payday logo into the background of that screen (lol).

This is an old photo that existed long before this program. And in my experience, the only time I see this kind of nonsense is among scam sites. Who try to leverage the credibility of a legitimate platform, to sell a scam.

And when you consider what the underlying program is about (Clicks Dealer), things go from bad to worse.

Not only is this a sketchy platform, but there’s some serious risks involved. Because the people running the site ask you for VERY sensitive personal information, just to withdraw your money.

Which is first of all strange. I earn a full time income online and I’ve never had to do this. And second it’s alarming when you consider the red flags with both Clicks Dealer and Digital Payday.

In any case, you most definitely will not be earning $5,000 in 24 hours. Or probably any money at all for that matter, since both of these sites are in my opinion scams.

It is possible to earn money online by posting ads for companies. However, sites like Digital Payday and Clicks Dealer are really just taking advantage of you.

They prey on people who do not understand how this process really works. So they can sell you stuff and make themselves rich.

People who really make money with online advertising, do not join sketchy platforms like this. They signup with a legitimate ad network (for free) and they learn the correct process to build a real business this way.

All of which takes time and effort, as with any real business.

And to be honest, earning decent money with ads (per click) requires a significant amounts of traffic. Because only a small amount per click is paid. So there is no way you will be making 5 figures per month without some serious longterm effort. Period.

In any case, I recommend avoiding this scam at all costs.