I received an email about the Six Figure Formula today, and decided to check it out.

My first impression wasn’t great, because the sales page is a bit spammy and uses things like fake scarcity to convince people to buy. But after spending some time within the members area, I am happy to say that there IS some real value here.

In this review, I’ll show you exactly what I found to help you decide if it’s worth buying…

The site (thesixfigureformula.com) consists of a sales video, which is presented by a guy named Shea Korte. 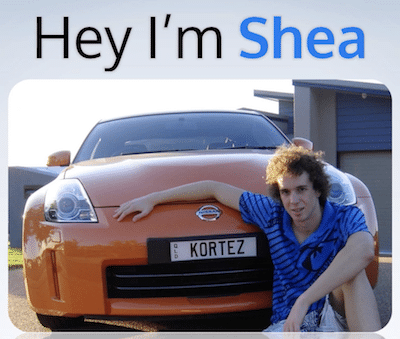 My initial reaction to this page was skepticism.

Because as I said earlier, the site uses fake scarcity to make everything appear ‘limited’ when it’s really not. And there is special emphasis on how a “complete newbie made $7,242.95 in his first month”.

The problem I have with this is that it doesn’t paint a very realistic picture about how long it really takes to earn that sort of money online.

In other words, it is hype.

Although to be fair, I have seen WAY worse in this space, so I guess you could take this with a grain of salt.

Anyways, in the video, Shea says he figured out how to crush it with affiliate marketing after a couple years of trial and error. So apparently that ‘first week’ was once he started using this new method (something like that anyway). And now he is sharing his secret to success with the world.

After watching the video, I decided to pay $1 to access the 3 day trial of Six Figure Formula. After that time the cost of this program is $37 per month. And once I paid, I was immediately sent through the upselling phase.

There were THREE upsells in total:

From there, I eventually wound up in the members area… 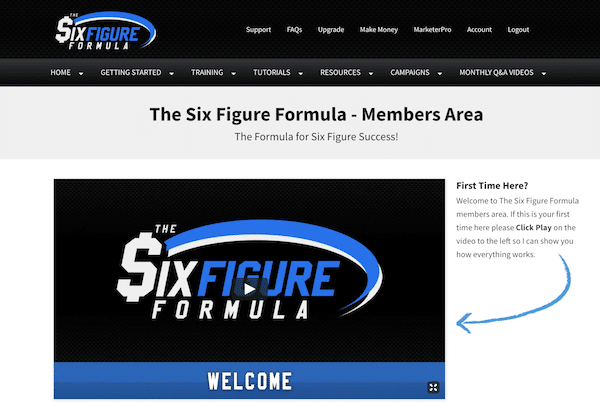 What Is The Six Figure Formula About?

The Six Figure Formula is a new program created by Shea Korte, that teaches newbies how to make money with affiliate marketing.

Affiliate marketing is a legitimate business model (this is how I earn a full-time income online) where you promote other people’s products for a commission. It’s simple and can be lucrative if you stick with it long enough.

Anyway, I was genuinely surprised by the sheer volume and quality of the training you get with this. There are 18 modules of training within the members area, which consists of dozens of videos and hours of training.

You also get access to ‘done for you’ capture pages and email swipes, which help you make money promoting Six Figure Formula itself. Along with a bunch of other resources and vetted lists of third party products and services.

So all in all, Shea does know his stuff and he is sharing a lot of value with you.

The training is extensive, but you can essentially break it down into THREE main sections:

I’ll briefly explain what each of these sections is about in more detail, so you know how it works and what to expect…

This is all about promoting Six Figure Formula itself.

There’s nothing wrong with promoting the same system, and this is not MLM or anything, it’s a straight affiliate program. Yet oddly, there is no mention of how much this affiliate program actually pays out. But it is a legitimate affiliate setup though, run through a company called PayKickstart.

The training walks you through the process of making money promoting the SFF, using your own autoresponder in conjunction with the existing capture pages. So the idea is to send people to the capture page, and collect email leads before sending them to the sales page. Where you earn a commission if they join.

The first two methods are free but the last one is not, and if this is the route you want to go you need a solid budget. Later in the training he also talks about other paid methods of getting leads.

There are 26 videos within this module, and it is essentially the starting point for people who do NOT want to promote SFF.

It is a more in-depth training series on affiliate marketing and covers some of the previous topics in more detail. Such as Facebook, YouTube and email marketing strategies.

As of writing this, I only have access to the first module in this training. It seems as if each of the remaining 7 modules in this section release every week, over a 7 week period.

Anyways, these modules are mostly about Opt-Intelligence and Marketer Pro.

In short, Opt-Intelligence is a service that allows you to buy leads. So instead of paying for traffic, you only pay for the actual email lead itself. I did not know about this until now, and it is actually very cool.

Marketer is a software that Shea and his team created, that manages your leads. It integrates with Opt-Intelligence, so that your leads automatically go into your Marketer Pro account.

There are 11 videos within this one module alone, so there’s obviously a lot more detail involved. But that is the general gist of it.

Despite my first impression, there is actually a lot to like about this program.

First of all, there’s lots of good training. You get boatloads of content from basic to advanced, not to mention there are even more tutorials than I mentioned earlier (supplementary training) and monthly Q&A webinars.

Second, Shea knows what he is talking about when it comes to affiliate marketing and really shares his knowledge. So I feel like there’s a lot that anyone can learn from him. Even if you are already crushing it online, there is ALWAYS room to learn more in this game.

Third, he walks you through all of the steps in detail, leaving nothing to your imagination. Full disclosure I didn’t go through every single video from start to finish, I simply don’t have the time to do that. But I did spend a lot of time watching the videos so I am confident in saying that from what I’ve seen.

Lastly, I like how Shea recommends quality third party service providers (like Aweber) and gives you free access to software he has created from the ground up (MarketerPro) which is easily a paid service.

First of all, I am not a fan of the sales page.

It is certainly not the worst I’ve seen, but it does use tactics like fake scarcity. Which is where they pretend there are ‘limited spots’ when there really are not, along with using a fake countdown timer. I really hate this stuff and it’s a big turn off for me. It also makes me hesitant to recommend this to people, because it just looks spammy.

Second, much of the training skews towards promoting stuff within the ‘make money online’ niche. Which isn’t necessarily a bad thing but given the sheer number of scams in this space, it wouldn’t be hard to start promoting junk.

Third, the immediate upsells were annoying and in my opinion, detract from the quality of the overall experience.

Lastly, considering you are paying for a monthly membership ($37 per month) it would be nice to see a community element. This would make getting support a lot easier than submitting a ticket and waiting for a reply. With that being said, they do have a FB page so that could prove helpful and they offer more support than many other programs.

Verdict – Is The Six Figure Formula a Scam or Legit Program?

Six Figure Formula is NOT a scam in my opinion.

I was definitely skeptical at first, but I was pleasantly surprised by the enormous amount of value within the members area.

This is definitely not the only way to make money with affiliate marketing. I know this for a fact because I use an entirely different approach (websites and free traffic from Google). But it does look like a viable option for those interested in social media, YouTube and paid advertising.

Either way, the $1 trial is easily worth it considering what you will learn. So it may be worth checking out the trial and see what you think before it renews.

Whatever you decide, I hope this review has been helpful!