Welcome to my review of The Freedom Formula.

This is new site that claims to help “everyday people” generate $10,000’s online, using a proven money making method. Apparently, this is something complete newbies can do.

But is it legit, or just another “get rich quick” scam?

Let’s take a closer look to find out…

This website (completefreedomformula.com) consists of a video that makes some bold claims.

According to the site, regular people are absolutely crushing it with this ‘system’. And all you need to do is signup for $27, follow some simple steps, and watch the money roll in.

The video never explains what you’re really buying into though.

Rather, it goes round and round in circles talking about how much money you can make, and how easy it’s all going to be.

This is a red flag and the first of many.

Despite what the sales page claims, making money online is not that simple. Regardless of what “system” you buy into. It just doesn’t work that way.

I’ve been earning a full time income online for roughly two years now, and I’ve tried and reviewed hundreds of ‘make money online’ programs over the years too.

So I know hype when I see it.

Anyways, I decided to dig a little deeper to find out how this system really works. And in the following section I’ll show you what I found, so you know what to expect before buying.

How Does The Freedom Formula Work?

First and foremost, The Freedom Formula is NOT a program in and of itself. It is actually a sales funnel for an existing program called Super Affiliate Network.

What this means is that when you buy The Freedom Formula, you are really buying a Super Affiliate Network membership.

This kind of ‘sneaky marketing’ is becoming more and more common these days.

Rather than be upfront about what you’re really buying into, they ‘mask’ the underlying program to make it seem like you’re buying something “new and fresh”. When this couldn’t be further from the truth.

In any case, the Super Affiliate Network is not an outright scam.

As a member you will get access to real training on affiliate marketing, and it is possible to earn an income this way. However, there are definitely some MAJOR drawbacks here.

First of all, the whole training is about promoting the same program you just joined- Super Affiliate Network. So you’ll be putting up spammy little sites to promote SAN, much like the person who put up The Freedom Formula site.

Second of all, there are HUGE upsells that run into the $10,000’s throughout the program, which every single member is strongly encouraged to buy. It starts at a low price point like $27, and progressively you are upsold higher ticket products by your ‘coach’ over the phone and within the members area.

These are upsells you must buy if you want to qualify to earn commissions promoting this stuff to others. Which is the only way to make the kind of ‘real money’ the sales page talks about.

Third, despite the heavy cost burden, most people lose money with this system. If you go to the ‘income disclosure’ page on the order screen, you will be taken to the Super Affiliate Network income disclosure. 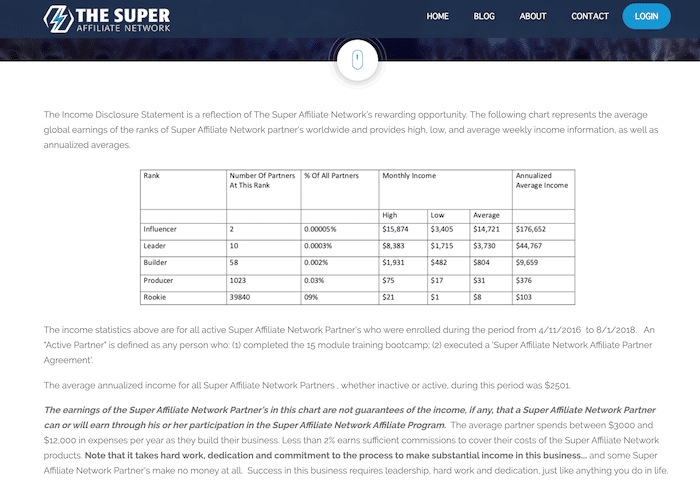 As you can see, FAR less than 1 single percent earn anywhere near $10k per month. And most people don’t even make enough money to cover the costs of being a member.

The average partner spends between $3000 and $12,000 in expenses per year as they build their business. Less than 2% earns sufficient commissions to cover their costs of the Super Affiliate Network products. — thesuperaffiliatenetwork.com/income

So to sum up how this works.. you join and pay through the nose to ‘qualify’, to recruit others into the same system. And if the stats are anything to go by, you’ll probably end up losing money in the process.

Verdict – Is The Freedom Formula a Scam?

The Freedom Formula isn’t exactly a scam because it’s just a sales pitch. When you purchase this, you’re really buying into the Super Affiliate Network.

Whether or not you believe Super Affiliate Network is a scam is up to you.

I think on one hand it’s not because you do pay money in return for real training, that can technically result in you earning money.

However on the other hand I’m not a fan of programs like this.

Because I find the marketing tactics they employ to be misleading, the costs are outrageous and most people make no money at all.

So I never recommend or promote stuff like this just to make a quick buck.

It is possible for complete newbies to earn real money online, and it doesn’t have to cost you an arm and a leg either. However it does require hard work and persistence.

Despite what many ‘online gurus’ will tell you to sell you their programs, making money online takes time and effort. So you really want to avoid any site promising you quick and easy results, because they are almost certainly telling you stories to make money off of you.

What you decide is up to you, I hope this review helps either way!