The idea of a profit cycle funnel sounds cool, and there are some good aspects to it. But it’s more of a ‘marketing pitch’ than anything.

In this article, I’ll show you exactly what they’re about and how they work. So you can decide for yourself if this is the best method to make money or not.

What Is a Profit Cycle Funnel?

A “profit cycle funnel” is a standard affiliate sales funnel, with a unique ‘marketing spin’. There’s nothing new about the concept itself (for the most part), it’s just a different way to describe an existing (and well known) online sales process.

The guy behind the ‘profit cycle funnel’ is Anthony Morrison of Morrison Publishing. He’s a successful internet marketer responsible for many products within the ‘make money online’ space. One of which I’ve reviewed in detail called Success With Anthony.

There are a lot of negative reviews and complaints about this guy if I’m being honest. And without a doubt some of his marketing could be considered spammy.

But he does know what he’s doing and there is value in what he teaches. At least based on the stuff I’ve seen myself.

How Does a Profit Cycle Funnel Work?

That’s pretty much the nuts and bolts of it, which is no different to any other sales funnel. Here’s an overview of a profit cycle’ sales funnel to show you what I mean… 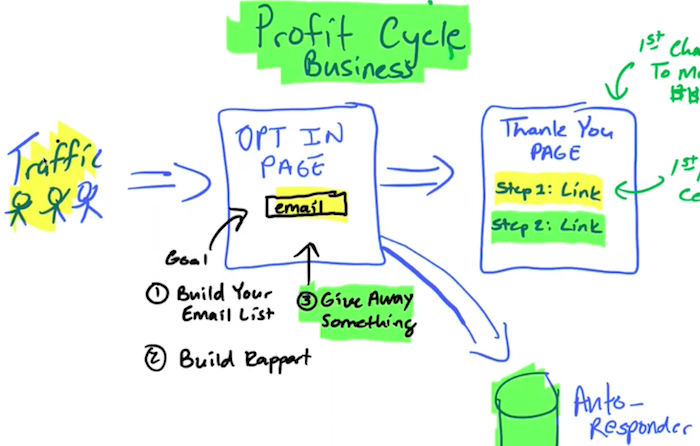 It’s a pretty straightforward process. As an affiliate, you can make money promoting other people’s stuff so it’s simple and it does work.

There is one unique aspect about how these profit cycle funnels work though. And it has to do with ClickFunnels, the program he promotes on the ‘thank you’ page of this funnel.

I think the best way to explain how this works in more detail, is with an example. And what better example to use than Anthony’s exact funnel.

Step 1 in the funnel: Visit the capture page and put in your email…

As you can see, the ONE goal of this page is to get your email. When you submit your email, you are placed into his email list so he can contact you down the road.

Step 2 in the funnel: You land on the ‘thank you’ page and follow the prompts…. 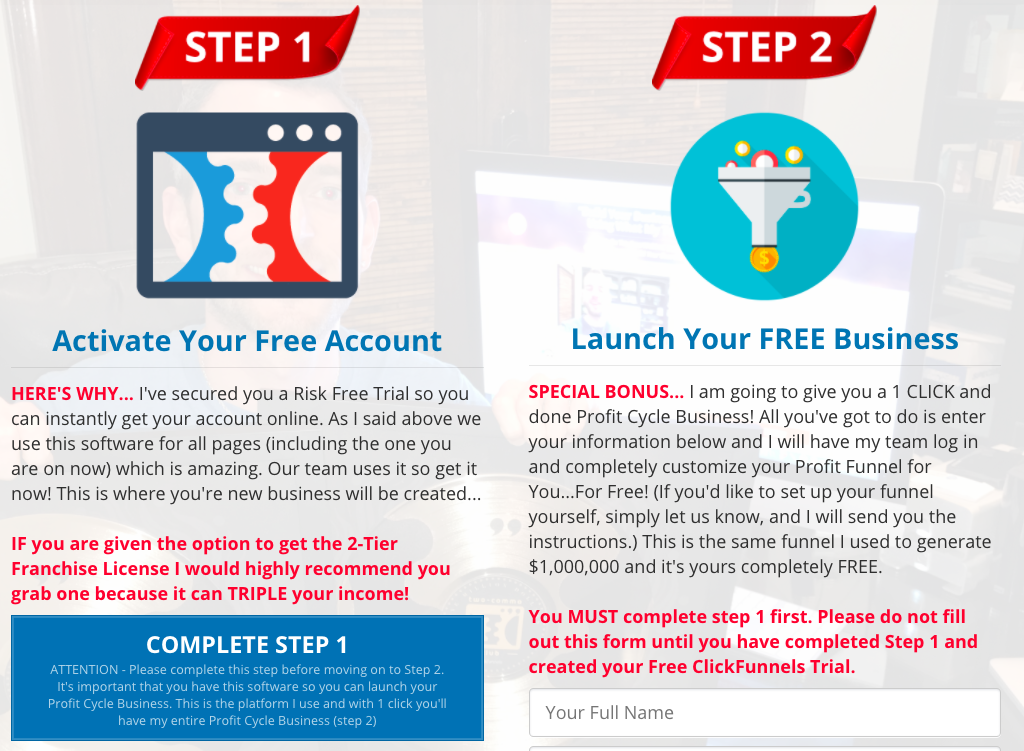 Normally, there would just be an affiliate link on this page directing you to buy something, or a link to download something. Like a free eBook.

However, with the ‘profit cycle funnel’ system, you are asked to complete two steps…

The first step is registering for a free account with ClickFunnels. Which is an ‘all in one’ sales funnel builder software. It’s absolutely a legitimate tool. I don’t use it myself but I know many who do. Anyways, the first 30 days is free and it’s $97 after that.

The second step is coming back to the same page and putting your account info in, so Anthony’s team can load your account with some free templates (sales funnel). You will essentially get access to the same funnel I am showing you right now. ClickFunnels is unique in the way they allow you to share sales funnels in this way.

This is a smart affiliate funnel in it’s own right. There’s no doubt about it. But other than the ClickFunnels aspect, it’s nothing new. And there are some distinct drawbacks to this model, just as there are benefits.

The main benefit is that it’s free for 30 days and you get access to a working sales funnel.

Is The Profit Cycle Funnel a Scam?

I think it’s unfair to call Profit Cycle Funnels a scam. I mean, it’s a free way to set yourself up with a converting sales funnel. The concept is one that does work and there is money to made. But there are drawbacks here that you should know about.

Firstly, there are many addittional costs involved in making this profitable. If you think you will sign up for free and start making money, you are in for a rude awakening.

You will need to pay for ClickFunnels ($97 per month), pay for traffic (how deep are your pockets?), and actual training so you know what you are doing. This is why Anthony contacts you via email to convince you to buy his program ‘Success With Anthony’ which shows you how this stuff works. Among others.

That’s all good and well, but there are tons of upsells within these ‘other programs’. Which inevitably sees people paying out a small fortune just to get started online.

The trouble with this method is that you are promoting the SAME funnel as thousands of other hopeful affiliates. The funnel may convert well now (according to Anthony it does anyway). But done for you funnels quickly lose their value when the masses jump in.

Not to mention, you are not building YOUR business for the longterm. You are promoting Anthony’s brand and establishing him as the authority. Rather than creating your own unique brand, with your own website.

There are some good aspects to a profit cycle funnel (AKA Anthony Morrison’s version of an affiliate sales funnel). But there’s also some very real drawbacks to consider as I explained in this article.

What you decide to do is up to you. Hopefully this article has given you more insight into what these funnels are and how they work. This way you can make a more informed choice rather than just going off the sales page.

7 thoughts on “What Is a Profit Cycle Funnel – Scam or Legit Way To Profit?”