I’ve been receiving some emails about Insiders Cash Club recently, so I decided to take a closer look at the system to see if it’s legit or just another scam.

In this review, I will show you what the system is about and how it works, to help you decide if it’s worth buying or not.

The Insiders Cash Club website (insiderscashclub.com) claims you can start making $1,000’s per week “in just a few clicks of your mouse”.

Apparently, all you need to do is “copy and paste” and the system does the rest for you. That is to say, if you are lucky enough to ‘claim your spot’ before it’s too late.

I have to be honest when I say this site is using a lot of classic scam tricks to convince you to buy. I’ve reviewed a lot of programs over the years and this one has all the red flags.

These income claims are massively overhyped.

No one is making that amount of money with any system. And the spots are NOT limited at all. This is known as fake scarcity and it’s a trick to lure more people in.

According to the sales video though… “lots of other people are making money with Insiders Cash Club”. Like “Sarah” for example, who apparently earned almost $40k in 3 months… 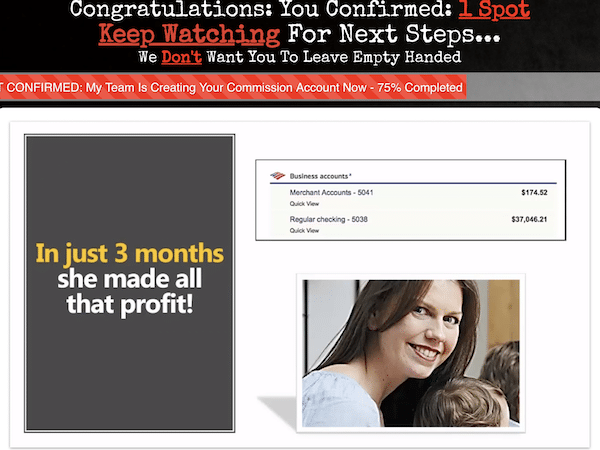 I was pretty sure this was just a stock photo though, because quite honestly it looks that way. Turns out my suspicions were correct…

Sarah is a fictional character and her story is obviously fake.

I see this kind of crap on scam sites all the time. For example I recently reviewed Home Income System and Your New At Home Career which also use fake testimonials.

What Is Insiders Cash Club About?

Insiders Cash Club is a new site claiming to help complete newbies make six figures per year, with a few clicks of a mouse.

This is obviously complete nonsense.

In reality, this is a system designed to make the people running it money, off of you. They make all these wild claims to get you excited to buy, but no system could ever live up to that level of hype.

The cost of the system is $8.99 per month which is a relatively low price point. And apparently you receive a “step-by-step guide on how to excel in the world of e-commerce”.

The truth is this is a ‘throw together’ of various ways to make money online, which you can in reality find anywhere online for free. For example affiliate marketing, which is where you promote other companies products online for a commission.

Anyways, you might learn some general stuff as a member, but don’t expect to be making $5,000 per week at the push of a button. Because NO business model can deliver this.

The Insiders Cash Club System works by first of all using extreme hype on the sales page to convince you that this is a game changing “secret system”.

One that will start making you money within minutes of joining.

If you click through to the next page you will see the checkout page which essentially tells you that you are getting “complete access to the ICC Clubhouse” for $8.99 per month.

This again is nothing more than trumped up claims because no one on planet earth is EVER paying $11k for what these people are offering. Period.

Anyways the initial fee is just to get you in the door. The moment you buy you are hit with upsell after upsell which is how they make their money off of you. Not to mention, they email you daily to convince you to continue buying more stuff.

Is Insiders Cash Club a Scam?

I believe Insiders Cash Club is a scam in the sense it could never possibly live up to the hype. The entire charade is about getting your money into their pockets, rather than helping you build a REAL tangible online business.

Some would argue that since you do get some training for your money it is technically not a scam. I think that is up for you to decide but personally I believe this is a scam.

The Insiders Cash Club (ICC System) is a site that makes a bunch of overhyped claims to get your money. And like all the other scam sites I see, they use fake testimonials and income screenshots to provide “proof” it works.

It is possible to earn money online but success is the result of hard work and persistence. It doesn’t happen overnight and there is no ‘system’ that will make money magically hop into your bank account. This sort of nonsense is what scammers say to make money at your expense.

What you decide to is up to you, and I hope you found my review helpful either way.