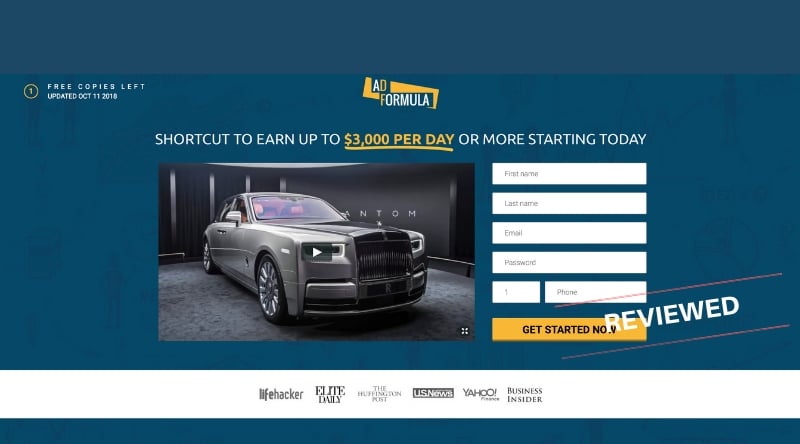 I review a lot of these “make money online” sites and they always sound amazing, but rarely ever deliver. So I can understand if you are highly skeptical of this system and want to know if it’s a scam.

In this review, I’ll show you what I found to help you decide if it’s legit.

The AD Formula website (adformula.co) claims you can start earning $3k per day or more, starting today. Which is a very alarming red flag from the get go, because nothing is ever that easy. This is purely hype and it is very common among scam sites that have the simple goal of making money off of you.

Anyways, I watched the sales video which is presented by “Jack Heaton”. He claims he is the CEO and founder of this “ad revenue system” that can generate you passive income…

Looks legit enough at first glance, but a bit of research reveals Jack is a stock photo:

Anyways, Jack claims that only 50 people are going to be able to watch the video in your country. And once a total of 100 people have seen the video, it will be taken down.

Which is absolute BS. A LOT more than 100 people are going to see this video. This is nothing more than a trick to make the system appear ‘limited’, which in turn motivates people to join on impulse.

And to be honest the video is FULL of this sort of misleading hype. I mean seriously, talking about how you are going to just plugin and start making $3-10k or more per day (yes he even says $10k per day at one point).

This is ridiculous and quite frankly insulting to a person’s intelligence.

ANY site that is promising you this sort of money is absolutely scamming you. There is no doubt about it. Because this is not how real online business works at all. This is extremely misleading hype- plain and simple.

The last point I want to mention is that this has NOT been featured in the news.

The video shows various generic “work from home” news clips. These are real news clips, but they are not talking about AD Formula at all. And the same goes for the logos of trusted companies they’ve literally copied and pasted onto the page.

The purpose of this is to have you believe the news is featuring this program to gain your trust. There is nothing credible about this whatsoever.

AD Formula is a sales funnel for a site called BannerBit. What this means is that AD Formula itself is NOT a system at all. It is just a sales page that exists to ‘funnel’ you into BannerBit.

And BannerBit is a known scam that has been running since last year.

I haven’t reviewed BannerBit on this site, but I have reviewed other CLONE sites that the same people run. Such as Clicks Dealer and Clicks Valley. Which is how I know this is a blatant scam operation.

If you want to learn more about any of these sites I highly recommend doing your homework. Either through my reviews above or on other trusted review sites.

In short, this ‘system’ is all about making money “flipping ads”.

Which is not a real business at all. It is not possible to make money flipping ads because this is something these people literally made up.

How Does AD Formula Work?

The way this system works is by first of all getting your name, email and phone number from the initial sales page. This is also where you create your ‘free account’ to BannerBit.

The moment you submit those details you are taken to the BannerBit members area.

Of course, neither the sales video or anything else on the AD Formula website tells you this is what you are really doing. Rather, “Jack” talks about how much money you will make and how easy it will be.

Once inside the members area, you will be asked to fund your account in order to buy banners. And purchase a Bronze, Silver, Gold or Platinum ‘package’ which range from $250 to $25,000.

So despite the video saying it is “free” to join the system- it is absolutely NOT free. The cost is insane and that is what makes this such a huge scam.

So to sum it up, AD Formula works by luring in unsuspecting newbies on the promise of a free push button system. With the sole intention of selling you into WAY higher ticket purchases.

There are also some serious concerns when it comes to the safety of your personal information. As I explain in my review of Clicks Dealer (see link above), they require your license or passport, bank cards, utility bills and more- just to withdraw your ‘earnings’. Which are fake earnings to begin with.

The sales page shows several examples of people who are supposedly making money with the system. As always I like to do my research to see if these are real or not.

And in this case it didn’t take me long to spot the fakers. Because I’ve seen these ACTORS on other scam sites over the years. I don’t expect you to take my word for it though so I will show you proof of what I’m saying.

The following member “Sarah” claims she made $588 with AD Formula in her first 10 minutes. Yet as you can see in the screenshot below, she’s just an actress from a site called Fiverr… 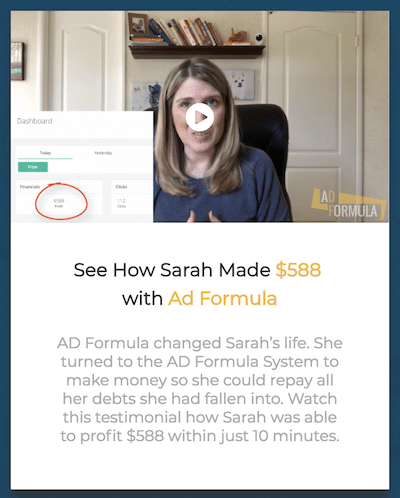 If real people really are making such amazing money, why do they need to hire actors?

The truth is because the system doesn’t work and real people are not making money with this at all. So they have to hire people who pretend like they are. Which in my opinion is extremely misleading.

Verdict – Is AD Formula a Scam?

I believe AD Formula is a scam because it is nothing more than a misleading sales pitch, designed to promote BannerBit. Which is a known scam and one that is ripping people off for a LOT of money.

It is up to you what you decide to do but if you’ve read this far, you know there is no way I could recommend this to you in good conscience. Sites like this exist to make money off of you- not help you start a real online business.

It is possible to earn money real online, but it takes time and effort. Push button systems like this simply won’t help you.