It sounds exciting, but you’re concerned it could be a scam or a pyramid scheme of some kind. This is your inner skeptic talking, and it can be very useful.

In this article, I’ll show you what you need to know to protect yourself from these scams.

What Is a Pyramid Scheme?

Pyramid schemes come in different forms and are becoming increasingly difficult to detect as time goes on. This is because dubious companies skirt around the law and avoid prosecution for some time.

However, it’s easy to spot a pyramid scheme when you learn the facts.

According to the official Federal Trade Commission (FTC) the vast majority of pyramid schemes share the following characteristic:

They promise consumers or investors large profits based primarily on recruiting others to join their program, not based on profits from any real investment or real sale of goods to the public.

The FTC sent a letter to the president of the Direct Selling Association (DSA) in 2004 which sheds more light on what defines a pyramid scheme:

…a multi-level compensation system funded primarily by payments made for the right to participate in the venture is an illegal pyramid scheme.

This kind of investment/ marketing fraud damages the economy and everyday people in a very real and sometimes devastating way. Families have been destroyed, financial lives ruined. The only people making amazing money with such schemes are a small percentage at the very top of the pyramid.

The two main identifying factors of a pyramid scheme are as follows:

When these two criteria are met, there’s a good chance you’re looking at a pyramid scheme. As I said earlier though, it’s not always simple to identify one.

How Do Pyramid Schemes Work?

The easiest way to explain how a pyramid scheme works is with an example:

In the above example, no money was made from the sale of genuine products and services.

This is simply one giant recruiting game where people are paying for the privilege of recruiting others. But these schemes must collapse…

Why Do Pyramid Schemes Collapse?

This is a mathematically unsustainable business model because there are only so many people in the world willing to sign up to the same scheme.

At any one time, the vast majority MUST be at the bottom of the scheme to make the small percentage at the top the kind of money they are making.

Yes, affiliates can eventually move up as well but there must be more people to replace them at the bottom in order to feed their success. 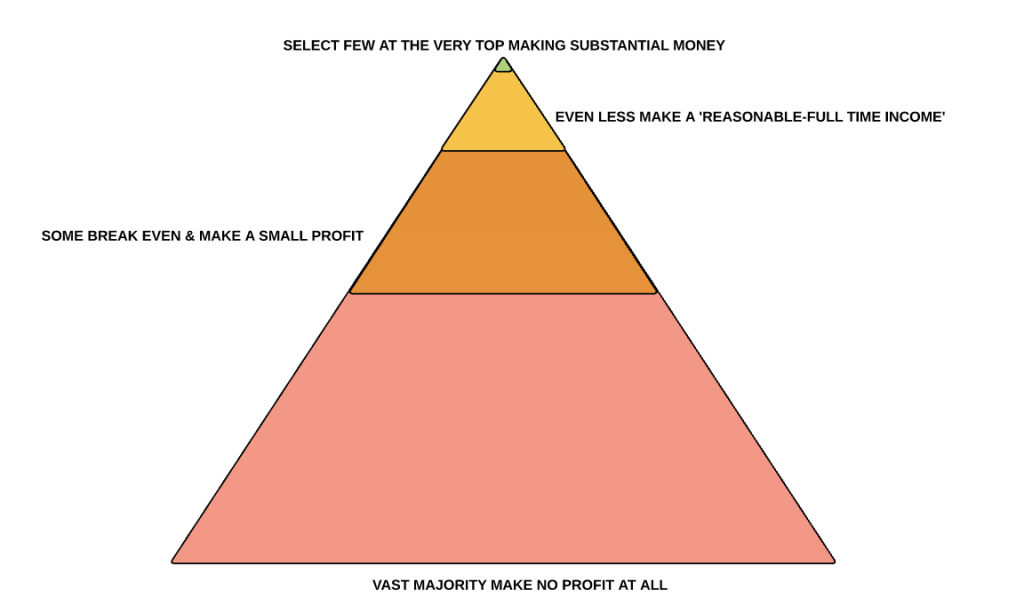 That would be fine IF there was an infinite number of people on the planet, but obviously this is not the case. When the maximum number of people have been recruited and growth slows (absolutely inevitable) the ones at the bottom have no chance at all to move up the pyramid.

When that happens they naturally quit the scheme and thus starts the topple of the great pyramid these con artists have built.

It really is that simple.

Without exaggeration this is a deceptive scheme designed to sell everyday people false hope and get rich off the back of their failure.

The Sneaky Tricks Used To Disguise These Scams

There are many different ways companies attempt to fool authorities and the general public into believing they are not actually such a scheme. This has made it increasingly difficult to detect and remove them from the marketplace.

Some schemes may purport to sell a product, but they often simply use the product to hide their pyramid structure. Modern pyramid schemes generally do not blatantly base commissions on the outright payment of fees, but instead try to disguise these payments to appear as if they are based on the sale of goods or services. The most common means employed to achieve this goal is to require a certain level of monthly purchases to qualify for commissions.

This clearly indicates that just because a company is giving people a product to buy and sell does not mean it’s legitimate and free from being classed as an illegal pyramid scheme.

This kind of work around is extremely common and only serves to act as an elaborate ‘transfer scheme’, masking it’s true identity.

In this scenario the people may be buying a product BUT they are primarily doing so to maintain their position and earn commissions from those under them. Certainly sheds light on the concept of many companies requiring a certain amount of money to ‘stay active’.

This is just a way companies can reward those with guaranteed commissions for recruiting. If there was no monthly purchasing commitment, these recruiters would make a LOT less money.

A lot less people being recruited would be buying product in a lot of these companies because a lot of  the time the products are overpriced and hard to sell to the public.

Multi Level Marketing (mlm) in itself does not constitute an illegal pyramid scheme as described above.

In a legitimate mlm you do not have to recruit others to be in business and make money and can sell products to create a decent income. The focus of a legitimate mlm MUST be on the sale of marketable products first and foremost if it is to be sustainable.

However, not all mlm’s are legitimate and some clearly fall into the above category of a pyramid scheme.

Generally speaking, the more product focussed the company is the better. Look for companies where a large portion of the profits are being generated from the sale of genuine products and services to retail customers.

Many people get confused with this.

Ponzi schemes are very similar in nature to a pyramid scheme except they are not hierarchical in nature and do not require recruiting. But they can, and often do have a recruiting element.

A typical ponzi scheme involves an investment into a somewhat mysterious operation promising higher than average ROI’s. The con artists behind these operation do not invest the capital into the market. Rather, they use the funds from new investors to pay off existing investors when they want to cash out.

Once it becomes difficult or impossible to pay out existing investors the scheme starts to manifest itself, this is where the con artist takes off with whatever they can and leaves the investors penniless.

How To Detect a Pyramid Scheme

In order to avoid scams like this, you need to arm yourself with the facts and ask the right questions. If someone is trying to recruit you, ask them (and yourself) the following questions:

Never allow some guru recruiter to convince you not to look for the truth. If they do not want to answer these simple yet important questions, run for the hills.

Many pyramid schemers convince people that, in order to succeed, you must not listen to the ‘haters and dream stealers’.

The sad part is there is truth in this.

Yes, as an entrepreneur it is monumentally important to follow your passion and not let those around you drag you into a negative and mundane way of thinking.

When it comes to pyramid schemes they are using this truth to hide their real intention and stop you from seeking the truth.

They want people to ‘believe’ in their company so that they don’t learn all the facts. The facts about why it is an unethical, often times illegal and unsustainable scheme that fails the vast majority of people.

I found this video to be very thought provoking. It paints a very clear picture about how pyramid schemes can appear to be legitimate when the reality is really quite different.

Pyramid schemes are a fraudulent and (in most cases) illegal scheme that only serve to benefit the a small percentage involved at the very top of the pyramid.

Whichever way you look at it, this is not a sustainable or ethical way of doing business and guarantees that the majority of affiliates make little to no profit despite their hard work. The very construct of this scheme guarantees, at some point in the future, it will collapse.