I came across AZ Formula via an email today and thought I’d take a closer look at the system.

Apparently, ‘Steven Cook’ is going to show you how to start making $2,000 per day as soon as today. All you need to do is become a member for $37 and this “automated 1 click profit system” will do all the work for you!

Thankfully, you are smart enough to know better than to believe crap like that. Let’s take a look at how this program really stacks up…

The website (www.azformula.co) is apparently run by Steven Cook. As soon as I saw his photo though, I was pretty sure I was looking at a stock photo.

I see this all the time on scam sites so it’s actually very easy to spot.

Anyways, turns out my suspicions were correct… 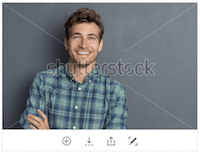 As you can see, Steven Cook is nothing more than a stock photo!

He claims to be some big time money making guru, with the answer to your financial freedom. But in reality he could be anyone.

Anyways, as I went through the sales video things got even worse…

One of the most common red flags I see with these “get rich quick” systems is how they use fake testimonials to convince you that ‘real people’ are making money.

And it turns out that this system is no different. Because the “ordinary people” making $10,000’s with the system, are really just actors: 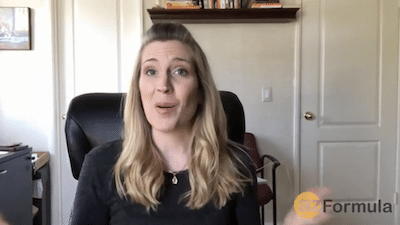 The woman above (who’s an actress) says that she made $11,000 in 2 weeks thanks to AZ Formula. Which is obviously a complete and utter lie now that we know she’s an actor.

I don’t know about you, but this kind of nonsense really pisses me off.

The reality is, no one is making that sort of money within their first 2 weeks of starting any online business. Let alone with this $37 ‘system’.

If it really was capable of making people so much money- why do the need to hire actors?

What Is AZ Formula About?

AZ Formula is a new system that claims to help you make $2,000 per day at the push of a button, almost immediately after joining.

As is typical with “get rich quick” programs, few details about the underlying program are given to you within the sales video.

However, it became clear after watching that the program is about making money with e-commerce. Specifically, selling your own products on Amazon.

This is obviously a real way to make money and potentially a lot of it. But there is no such thing as a “one click automated system” for making money this way.

This would have to be one of the most misleading claims I have seen in a while now.

Promising that you will make $10,000 a week almost immediately after joining, at the push of a button, is nothing short of insulting.

Anyways, I’ve bought into a lot of these programs over the years. And in most cases, you are really buying access to an e-book or short video course, made up generic content. Stuff you can easily find for free online.

It is never “secret” and it never lives up to the hype.

Upsells To Expect After Buying…

That’s not extreme in terms of upsells and having upsells doesn’t make something a scam.

However, it can be misleading in some instances. Especially if the first product is really just to get you in the door, and you really need to spend more if you have any chance of making money.

Which is quite often the case with these sites. From what I have seen it wouldn’t surprise me one bit.

Anyways, given the extreme level of hype, the fake testimonials and my experience with losing money to crap like this over the years, I chose not to buy this.

I know first hand that real money is not made at the push of a button. Because I actually earn a solid income online myself so I know what it takes to get an online business off the ground.

Anyone promising you push button money is looking to make a quick buck at your expense. Plain and simple.

Is AZ Formula a Scam?

AZ Formula is a scam in the way it is pitched- without a doubt.

The sales material is FULL of extremely misleading hype and everything is fake. From the so called “CEO” to the testimonials. They even go as far as to use logos of news and finance sites, leading you to believe the program has been featured on these sites…

This is 100% fake and yet another red flag. It’s also further proof the people running this site care about ONE thing- getting your money.

Some people will consider the actual program itself not to be a scam, if you do get some tangible value for your money. Like an e-book or short video course.

However, I personally beg to differ.

I think if someone promises you one thing ($40k per month at the push of a button) and gives you something else entirely (some basic training at best) then it’s still arguably a scam.

I can say with absolute confidence that AZ Formula will not deliver (anywhere near) those outrageous claims.

The good news is, this product sells through ClickBank. Which means you should be able to get your money back if you do buy.

ClickBank is a third party affiliate network that has been allowing a lot of scammy products through their doors recently. I’m not sure why but there has been quite an influx lately. It’s a shame because ClickBank is a good company in and of itself.

It is possible to make good money online. I personally earn a full time income online with affiliate marketing. Which is where you promote other people’s products for a commission.

And it’s absolutely possible to make good money selling your own products on Amazon.

I recently bought a well known program that teaches this very thing, which cost me about $5k. I mention this because I am in the process of building my physical products business up. So I know first hand what a REAL training looks like and I understand the real process of making money this way.

In any case, buying into programs that promise you “push button success” will always end in disappointment. Regardless of what the individual business model is. Because this is not the reality of how real online businesses are built.

What you decide to do is up to you, but that’s my take. Hope it helps.