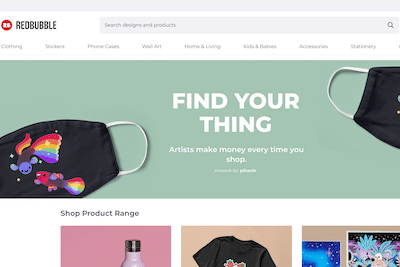 Indie artists searching for a convenient place to showcase their designs to potential buyers would seemingly love Redbubble.

But can you really make money with it?

Redbubble is an online marketplace where artists can upload designs for various products. Artists set their own profit margin percentage, and the company takes a share of the sale. You can make money, but they’ve been involved in some troubling controversies.

Read on to find out more about the company, how the process works, how you can earn money, and the company’s controversial past.

Redbubble is an online marketplace for print-on-demand products that functions with user-submitted artwork.

It was founded in 2006 by three guys named Martin Hosking, Peter Styles, and Paul Vanzella in Melbourne, Australia.

The idea is that graphic designers and artists can create unique designs and list them on the site. The designs can be for products like:

Alternatively, you can create a design that works across multiple different products. Then you upload it to your Redbubble shop, someone buys it, Redbubble’s printers print and ship it, and you get paid!

The company itself is quite successful, having over 600,000 artists and an annual revenue of $115 million AUD.

How Do You Make Money With Redbubble?

To get started making money with Redbubble you will first need to create an account on their website.

This consists of creating a username, password, and entering your email address. Then you’ll receive a confirmation email to activate your account. This needs to be done before you can move on to the next step.

After that, you’ll need to choose your currency and payment option, which can either be through PayPal or direct deposit into your personal bank account.

Bank transfers are only available for Australia, the U.S. and the U.K.

Once you have done this, you’ll need to create your avatar and your cover photo for your account page. Then, you’ll want to start designing.

Once you’ve perfected your first piece of art, you’ll have to upload it to your Redbubble account and choose what products you want it to go on, and fill out any special details regarding that (ie: where your design would be placed on a T-shirt, etc.).

You’ll also need to set your prices. And after this is done, Redbubble pretty much handles the rest. When consumers come to purchase your products, Redbubble takes the orders, does the printing, shipping, and handles any issues that may arise.

When someone purchases your product, you’ll receive a “You’ve Made A Sale!” email.

And in that email, here’s what you’ll see:

But it’s important to note that the sale is not final until the product is actually printed and shipped. Until then, the customer has a chance to change their mind, and if they do, you won’t be paid.

However, if the customer gets the product, then the pay will go into your Redbubble account. The pay cycle then begins on the 15th of each month, and you’ll get paid for shipped products once your account reaches the $20 threshold.

If you are using the PayPal payout method, then you can expect 5 business days from meeting the threshold to receive payment. A bank account direct deposit will take 7 business days.

How Much Can You Make With Redbubble?

How much you can make with Redbubble is like most other income sources where you get to choose your own pricing, it depends on the price you set.

All products come with a base price as set by RedBubble. This is set to cover the service and operational costs for them to make each product.

You then get to choose your markup amount. This is the percentage that you would like to markup from the base price – it’s essentially your profit margin.

Markup percentages are automatically set at 20%, and you can choose to either lower or raise them as you wish.

You’ll want to account for the amount of time it took to design your art, but also you’ll want to price competitively, since there is a lot of competition.

RedBubble also offers discounts, which will affect your profits, but not your margin. For instance, say Redbubble offers a 10% discount when someone buys 10 shirts or more.

If the base price was $10 per shirt, and someone got the discount, that means they would only be paying $9 per shirt instead.

Now, that won’t affect your profit margin – your markup of 30% would still be 30% – but it’s going to be a percentage of the discounted base price, meaning you would make a little less profit.

What costs are involved?

Aside from the costs involved of owning a computer and paying for internet, there are relatively few costs to factor in.

Redbubble is free to use. They make their money by taking the lion’s share of what gets sold.

The only potential cost would be if you spent any money in marketing and self-promotion.

While not necessary, you might want to consider spending a little bit on Facebook or Google ads to drive more traffic to your Redbubble store.

With over 600,000 artists, there’s hundreds of thousands of designs out there, and it’s going to be hard for someone without a following to stand out among the crowd. If you market well, however, then you’ll not only drive sales but also gain repeat customers and a loyal following.

Before beginning to work with a company, it’s always good to look at their background and see if there has ever been any controversial issues with the company (legal or otherwise).

And RedBubble does, in fact, have some issues worth taking into consideration.

Most of these issues took place around 2011 and 2012, and they revolve around certain designs that were sold on Redbubble – and the company’s clear lack of screening products before they are allowed on store.

To give you an example, there were T-shirts that had images taken from a satirical comic strip called “Hipster Hitler.”

Obviously, the comic was viewed as anti-Semitic, as were the T-shirts bearing their imagery.

Ultimately, this led to a bunch of bad publicity for Redbubble, and they eventually removed the Hipster Hitler clothing line.

They also changed their guidelines to prohibit “parodies of genocide” – something that probably should have already been in place, but I guess better late than never.

Shortly after that incident, articles began reporting on a disturbing line of baby and children’s clothes being sold on Redbubble.

These designs included pictures of Hitler, Osama Bin Laden, and various serial killers such as Ted Bundy and Charles Manson.

There were also baby clothes being sold with images making jokes about drug use, and so on.

Of course, there’s a (large) measure of responsibility that needs to be placed on the people who decided to make these designs in the first place.

However, though old, these severe instances have, for some, completely tarnished the company’s reputation beyond repair.

So, if you’re trying to build a brand for yourself, it’s worth considering whether or not you want to be known for using a company that allowed such things – and that might possibly again in the future.

In the end, you can really make money with RedBubble. You’re in control of your profit margin, and (after designing) there really isn’t a lot of work involved on your part.

Of course, you’ll want to make sure that your artwork is visible to potential buyers by considering the idea of self-promoting.

And don’t forget to seriously consider whether or not you want to be involved with a company that allowed such vulgar and disrespectful designs to be sold on their site.

If you want to try a different site, check out Printify – it’s similar but doesn’t carry so much baggage.