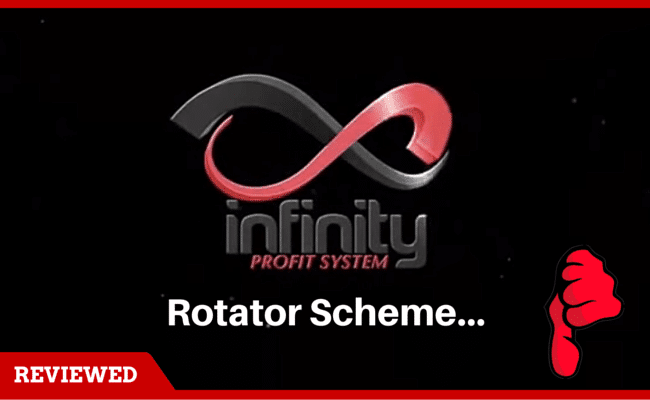 The idea of signing up to an mlm company through a rotator and claiming your position in a ‘guaranteed’ money making machine an exciting prospect no doubt.

But how does the Infinity Profit System (IPS) rotator really work and is it really going to make you lots of money?

The short answer is no. Read on to learn why…

What Is a Rotator?

A rotator is often used by affiliate’s of an mlm company as a way to build their team and their team’s team in the process. It also gives people a strong reason to sign up through a particular distributor.

They promise participants traffic and/ or referrals for doing nothing more than signing up through them.

There are other kinds of rotators but for the purpose of this review I’ll focus on this example.

The way they work is really quite simple:

Step 1- Sign up to an mlm company through an affiliate (such as an IPS affiliate) offering such a rotator.

Step2- Once you’ve signed up and followed the instructions given to you, you’re placed in the rotator and wait for your ‘turn’ in the hot seat.

Step 3- You refer people to this same sales page (coded with your unique affiliate ID) to build your downline, and ultimately the chief rotator’s downline.

Step 4- You get however many views, clicks or referrals that have been promised and exit the rotator system. This same system continues for those you’ve signed up, thus building your team beyond your wildest imagination!

There’s just one small problem… that is not how it works in reality and I will prove this to you now.

Why They Almost Always Don’t Work

I first of all want to note that I’ve already reviewed IPS and I explain all of the details about their compensation plan in that post.

The short story is that the way they present the opportunity really quite deceptive. The sales video explains things in a blatantly misleading way as to what it takes to build a profitable organisation with their company. Without exaggeration, they are literally telling people that in just 10 short weeks that they can easily build a downline of almost 700,000 people!

This is counting only the people in your first and third legs, since legs 2 and 4 get ‘passed up’ to your sponsor. I won’t elaborate on the exact details here but the review above explains all of this. The bottom line is that you are already dealing with a deceptive company.

To make any kind of decent money requires a MOUNTAIN of recruiting. Not only is this kind of recruiting unsustainable but it reveals the true nature of this company as I explain below.

I also want to point out that their entire downline system is exactly the same as another company I’ve reviewed called ‘National Wealth Center’, they too have an affiliate promoting a rotator called the GPS Funnel.

In my review of GPS I prove beyond any shadow of doubt that the reason there’s so many complaints online from people not getting their free referrals as promised, is because the entire system is fundamentally flawed.

In the GPS system for example, for every one person that joins the rotator there MUST be 4 new people signed up to bump that person off the waiting list. Mathematically, this results in an ever increasing line up of people ahead of new recruits that inevitably blows way out into tens or even hundreds of thousands of people, all waiting in line.

No matter how many people they sign up into this rotator, the line just keeps on increasing.

The end result of this scheme is a ton of people signing up based on the false hope of easily building their downline when in reality they wait months, and even years to see this come about! Meanwhile they’ve just spent hundreds or even thousands of dollars on low grade products to stay ‘commission qualified’.

The traffic rotators are not quite as bad since they don’t promise something they can’t deliver. There is no guarantee of anything other than traffic so the line will generally move much quicker and in most cases deliver some kind of traffic. These can still take significant amounts of time though, depending on how many people are signed up and how much traffic is being promised.

The IPS Rotator Itself

Unfortunately, the company and their affiliates are rather secretive about the details of the IPS rotator itself so it is impossible to inform you on exactly how this one works.

I only know there is one and it is being used as a means to convince people to sign up.

What I can also say for a certainty is that you’ll need a ton of referrals to make decent money with this company and you will sure as hell not be making a full time income within 10 weeks unless you are a seasoned internet marketer with a seizable budget, email list and/ or existing flow of quality traffic from organic sources.

In fact, the overwhelming majority of folks don’t even make enough to cover their costs in these kinds of schemes.

In my opinion, this is not a legitimate business model. Rather I believe it is a recruitment driven pyramid scheme presenting a ‘front’ of legitimate products.

These kind of schemes pay current investors with new investments and ultimately collapse when recruiting dries up. Given the sheer number of recruits needed to make decent money in this company’s compensation plan, this will probably happen sooner rather than later.

Why Is IPS Such a Scheme?

There is a very strong emphasis on recruiting and you are primarily being paid out of revenue gained through new affiliate investment, as oppose to making money based on the sale of genuine products and services to the public.

Very few people (if any) are buying these products for any reason other than promoting the opportunity.

I have seen their blogs, they are cookie cutter garbage solely designed to promote IPS. They talk about personal branding when the reality is their personal branding consists of pimping their opportunity, giving people re-hashed content and not even providing an ‘about me’ page.

That is not personal branding or a good way to build a website/ blog. Period.

You must purchase the product to promote them in addition to paying the $10 admin fee each month, this ‘pay to play’ system guarantees that recruiting people is profitable. Without this purchasing requirement, few affiliates would be making money since there are no genuine customers purchasing these products.

Thus, these products are a front for the real business model, a business model that guarantees the failure of the majority right down to it’s inevitable collapse.

In my opinion, this is a recruitment driven pyramid scheme with the front of legitimate products to skirt around the law. This kind of deceptive behaviour is extremely common.

Adding the rotator is just a way for affiliates to build their downline. Yes, it will inevitably build other affiliates downlines in the process and some will undoubtedly make money as a result. I am not denying this.

Unfortunately though, these systems do not help the vast majority.

Having such a rotator system in place only serves to emphasises the recruiting aspect of this ‘opportunity’ and as such guarantees the majority will fail to make decent money. When recruiting inevitably slows, those at the bottom naturally start dropping off and when this happens the entire scheme collapses.

I do not recommend any mlm with a strong emphasis on recruitment such as this.