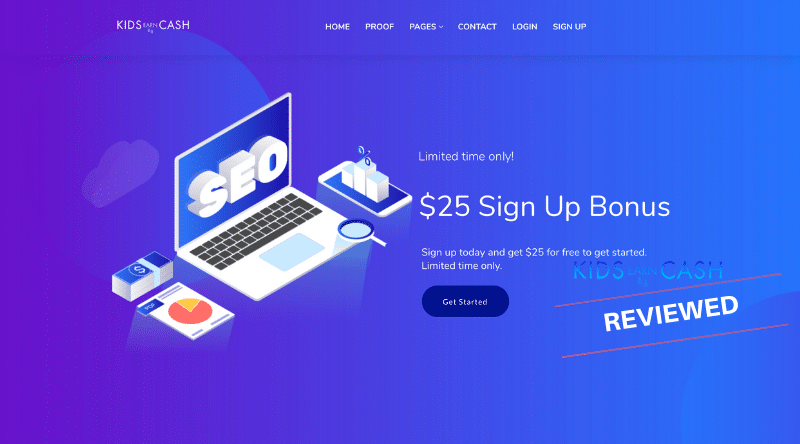 Welcome to my review of Kids Earn Cash.

This is a new site that claims to help you “make $500 today” and continue earning more money, simply by sharing your link on social media.

Sounds cool, but is this legit or just another scam?

I came across this site (kidsearncash.com) today and decided to take a closer look.

The site claims to be an “influencer platform”, which (in and of itself) is a legit concept. An influencer platform is basically a site where people who have large audiences on sites like Instagram and Facebook, can connect with brands looking for niche advertising opportunities.

So this is essentially what they’re claiming to be.

And apparently, all you need to do to start earning is signup for free and share your referral link on social media. They claim to pay you $2 per person who clicks on your link, and $10 for people who create a free account.

But unfortunately, that’s not what this is really about..

What this is really about, is convincing you to signup, so they can get your personal information. And by sharing your link, you are unknowingly luring others into the same trap.

You may “think” you’re earning money, but nobody EVER gets paid.

And this is nothing new either. I’ve come across many similar scams over the past few years of running this blog. For example Pay Hourly Jobs and Best Cash Job, which are virtually the same scam, just different branding.

They lure you in, you share your link and see the ‘dollars’ rising in the members area. And eventually when it comes time to cash out, no cigar.

The sad thing about these scams is you think it’s harmless because it’s free to join. But as I’ll now explain, joining this site could cost you a lot more than you think.

How Does Kids Earn Cash Work?

The way Kids Earn Cash works is by luring you in on the promise of “quick and easy money”.

And once you join, they make it appear as though you’re earning real money. But nobody can ever withdraw when it comes time to ‘cash out’.

This is because the real reason this site is running, is to get your personal information.

How do they do this?

Well they first get your name and email when you create your account. Then they get your address (or PayPal email) within the members area (so you can withdraw your money). And finally, they request your phone number so you can “unlock” extra ways to earn, like doing paid surveys.

So already they have your full name, email, address and phone number.

And since it appears as though your earning, all of this seems legit. Which is why many folks will continue sharing their link with people they know. Thinking they’re earning $2 per click and $10 per signup. But nobody can ever actually withdraw anything.

How do I know this is BS?

Well there are three main reasons, which I’ll explain in detail now…

First of all, as I said earlier I’ve come across this scam many times over the past few years.

All they do is create different names, URLS and swap a few details around. But the way these sites work is always the same and nobody ever gets paid.

If you read the reviews I linked to earlier, you’ll see exactly what I mean.

Second of all, no legitimate company is (ever) going to pay completely random people $2 per click on a link or $10 to get free signups.

I earn a full time income online doing affiliate marketing, so I know how that this is 100% BS. This is simply not how real online business works, not even close.

Even if (by a stretch) a company was willing to pay such a high amount for random clicks, there would be a serious vetting process in place, so they at least knew the clicks were real. In this case, you can easily watch your ‘money’ rise by clicking on your own links in an incognito window.

Not to mention, earning $10 per free referral is an outright joke.

For this to be even in the ballpark of legitimate, there would (at the very least) have to be SOME real advertising within the members area. So that the company can actually profit from their enormous $10 per referral outlay.

Either way, the very business model is clearly fake when you understand the real process of online marketing. Which is why they prey on people who are new to the idea of making money online.

I also want to point out that the so called “income proof” the site provides is in reality non-existent.

There is one video of a random guy named “Tanner Fawks”, who claims he made $11 million and he is apparently going to provide proof.

All he does is show you inside the members area, then the video cuts out before ANY shred of credible proof is provided. It’s laughable they even use this to be honest.

Other than this, there’s some text on a screen from ‘anonymous’ people who apparently are cashing in big. Which I’m sure I don’t have to explain to you, is not even close to legit.

3- This SAME Site Has Been Running Under Multiple Alias’

The third reason I know this site is BS, is because it has been running under under at least two different names/ URLs that I know of…

I came across these sites while doing my research. It seems they were running for a few months, then shut down and began redirecting people to this latest ‘version’- called Kids Earn Cash.

This sort of ‘bait and switch’ is common among scam sites.

The people running this scam know that you (and the law) are going to figure out the scam (because nobody can withdraw). So they shut one version down after a few months when it becomes more obvious, and continue the scam under a new name and URL.

Chances are that within a couple months from now, this version will be defunct and a new one will have taken its place.

I also want to point out that while researching the above sites, I came across the BBB page for Kids Earn Money. Which is literally FULL of complaints, and the BBB (Better Business Bureau) gave the site an F rating as you can see below… 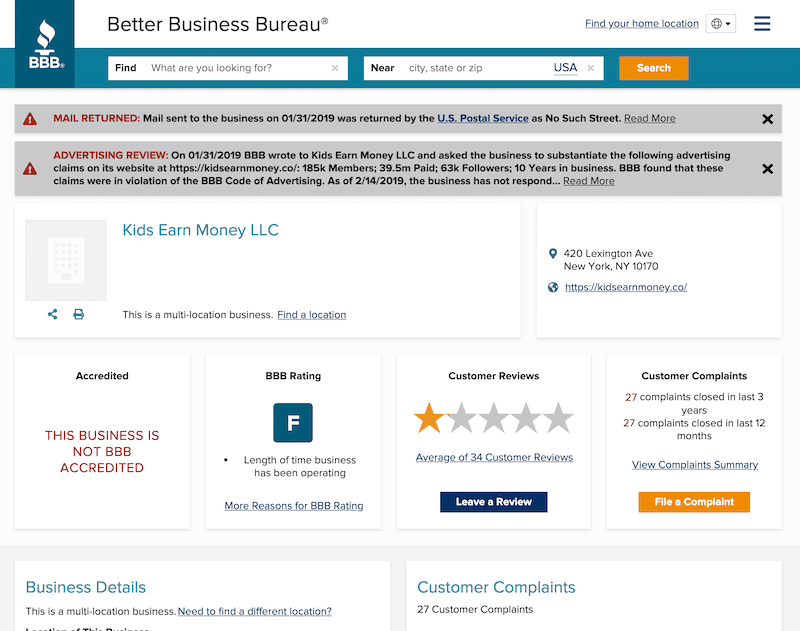 In addition to checking out the above BBB page, I also recommend you ‘Google’ the above sites. Spend some time reading/ watching other honest reviews, and you will see that nobody is getting paid.

And even though it’s free, it’s one of the worst types of scams I’ve come across. Because not only are these scammers getting your personal information, but they are using you to lure others in.

It’s quite a clever scam too when you think about it.

Because after joining, people are plastering their links all over social media (hoping to earn money), and spreading the scam in the process. And since it’s free, and it appears as though people are earning money, many people join and fall victim to this scam.

Well, when scammers like this have your personal information, the best case is that you will receive a ton of SPAM. By phone, email and direct mail.

And not only will these people SPAM you, but they’ll very likely sell your information to others who will SPAM you with more offers. Over and over again.

Believe it or not, this is big business among scammers. The people running this site are generating a HUGE list of people who are interested in making money online. And unethical marketers will pay through the nose to access this so they can sell you stuff.

The worst case scenario is identity theft. This site is setup to get as much information as possible from you. And the more information they have, the easier it will be for them to use your identity for fraudulent purposes.

Either way, these people are making money off of you, rather than helping you earn money. Nobody will ever be able to ‘cash out’, because this site is fake.

It is possible to make money online, but the truth is it takes time and effort. If you want to be successful you need to learn real skills and build a real business if you want real results.

It simply won’t happen by plastering scam links all over the internet.