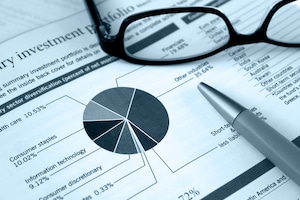 Welcome to my review of Chris Rowe’s Sector Focus.

I first discovered this through a presentation on the True Market Insiders website, where Chris Rowe explained the importance of choosing the right “sector” to invest in before you even think about choosing a stock or ETF.

He then went on to say that he can help you do that with his Sector Focus service.

I must admit, I was quite intrigued by his seemingly simple yet potentially promising approach to “sector investing.”

So I decided to take a closer look to find out more and see if it was worth joining or not.

And in this review, I’ll share what I found with you so that you have a better idea of what to expect in case you decide you want to join.

One of the first things that caught my attention with Sector Focus is how Chris Rowe states that the broad indexes most people use to gauge the market are (more or less) useless.

The market everyone looks at – the Dow, the S&P 500 – is the last thing you want to look at as an investor.

In case you’re unfamiliar with these – the Dow Jones Industrial Average (Dow) and Standard & Poor’s 500 (S&P 500) are stock market indexes that track the performance of a group of individual stocks in the U.S.

The Dow tracks a group of 30 stocks, while the S&P 500 tracks the performance of a group of 500 companies. And both are popular gauges of how the financial market and economy are performing since they track some of the most successful companies in the stock market.

Chris Rowe, however, says this is a flawed measure.

And while I’m sure many would disagree with him, he does provide some compelling reasons as to why he says this.

For one thing, he points out that these popular indexes aren’t accurate measures of how the broad stock market is performing to begin with.

Because the Dow is only made up of 30 companies, and even though the S&P 500 is an index made up of 500 companies, the top 50 companies have the biggest impact on its price.

So he points out that these aren’t very accurate gauges of broad market performance, even though many “experts” follow their every movement.

Second, Chris points out that there’s simply not as much upside potential betting on the broad market sectors as there is within the smaller sectors of the market.

But what does it really mean?

It means that if you know how to identify the right sector and sub-sector to invest in, you could potentially see higher returns than simply betting on the broad market. Because you can cut out the losers, so to speak, and focus on the winners.

Okay… but what exactly is a sector? And how does Sector Focus work?

How Does Sector Focus Work?

In this context, a sector is just a group of companies operating within the same broad-level industry. And each sector can be broken down into numerous sub-sectors.

For example: health care, financials, and energy are three distinct market sectors. While solar power, natural gas, and biofuel are sub-sectors of the energy sector.

There are many different ways to identify different sectors and the sub-sectors within them. This is just one quick example. But it should be enough to give you an idea as to how it works.

Also worth mentioning is that sector investing isn’t something Chris Rowe invented.

Many fund managers, portfolio managers, and individual investors consider the different market sectors when making investing decisions. Whether it’s to make sure their fund or portfolio is well-diversified or because they want to target a specific sector or sub-sector.

However, what is unique about Chris’ Sector Focus service is how he analyzes these sectors and how he finds the opportunities that he shares with subscribers.

According to Chris, there are four main steps involved in his process:

The main premise behind this strategy is that you’re (theoretically) limiting your downside potential and maximizing the upside potential by only investing in strong sectors.

On the one hand, you’re potentially limiting the downside because you’re only betting on stocks and ETFs within sectors that are performing well and that are likely to continue doing so, rather than just picking individual stocks in any old sector.

And on the other hand, you’re potentially maximizing the upside because there’s typically more volatility within smaller sectors than broad market indexes.

It’s an interesting approach. But at the same time, you need to know what you’re doing to be successful. Because if you choose the wrong sector, stock, or ETF, for example, you could end up worse off than if you’d simply bet on the S&P 500 like everyone else.

And that’s where the Sector Focus service comes into play.

For $168, you get at least ten “Sector Focus” trade recommendations each month, weekly market and sector analysis from Chris and his team, and a “featured sector of the month” video.

You also get access to a secure members area, and access to the Sector Focus trades Chris is currently recommending so that you can get rolling right away.

Overall, I think it’s quite a comprehensive service for the price.

At the same time, you are putting a lot of faith in Chris Rowe and his recommendations. So let’s take a closer look at who he is to see if he’s worth paying attention to.

Who Is Chris Rowe?

Chris Rowe is a former wealth manager and broker who started his career on Wall Street in 1995.

After leaving Wall Street and selling his firm, Chris says he could have retired, but he enjoys what he does and likes helping people achieve their financial goals.

So he decided to get into the world of investment education.

This led him to co-found a financial publishing company in 2004 called Tycoon Publishing which, according to his bio on the True Market Insiders website, “published sophisticated and unbiased research for individual as well as professional investors.”

Today, Chris Rowe is the founder and CEO of True Market Insiders.

Which is a Florida-based financial publishing company that provides education, tools, and services to help individual, self-directed investors and traders become more successful.

His most popular services are probably Sector Focus and Sector Prophets.

But he also shares useful insights in his free True Market Insider e-Letter, which provides those who subscribe with commentary and market analysis via email each week.

What are his current predictions?

Chris is an expert on slicing up the market into different sectors and sub-sectors and investing in what he thinks is in the best stock or ETF, in the strongest sector, at any given time.

So his predictions change over time as market conditions evolve.

Lately, however, his tech stock predictions have been getting some attention.

For example, Chris recently released a presentation called “America’s Tech Boom 2.0” where he details his latest prediction about what he’s calling a rare “millionaire maker event” that hasn’t occurred since 1999, thanks to the convergence of three economic triggers.

And if you watch that presentation to the end, you’re directed to join Sector Focus for a reduced price of $79 and are offered some bonus reports. One of which details three small tech stocks that Chris says could soar as a result of the coming tech boom he talks about.

Bottom Line: Should You Join?

Whether or not you should join Sector Focus is a decision only you can make. I think it could be worth checking out if you like the sound of Chris’ strategy and want a more fast-paced advisory. But at the same time, there are drawbacks to consider, and it’s not for everyone.

In any case, let’s start with the good.

First, Chris’ approach to investing is somewhat unique compared to most other services I come across. Because instead of being tied to any one sector (like tech or natural resources), he seems to go wherever he sees the opportunity in the market at any given time.

I also find it interesting the way he starts with a broad sector he’s interested in and “niches down” to find the best potential opportunities within each sector and sub-sector.

This doesn’t necessarily make it a superior strategy to others, but it does seem like a more structured, intelligent approach to investing overall.

The other thing I like is the value aspect. Depending on which page of the True Market Insiders site you visit, the cost of joining Sector Focus is between $79 and $168 per year.

And for that, you get ten trade ideas each month, market analysis, insights, and pretty much everything you need to learn from Chris and follow his recommendations.

What’s the catch? I don’t really know if there’s a “catch,” but nothing is perfect, and the service isn’t going to be ideal for everyone.

For example, Sector Focus may not suit those looking for a long-term, value investing service, those who want to avoid certain sectors, or who want to invest for dividend income.

It also might be a little fast-paced for some. Subscribers get ten new trade recommendations each month, whereas most advisories share one stock pick per month.

The other thing I want to point out is that, even though I do believe Sector Focus is a legitimate service, and there is a 60-day money-back guarantee in place, there’s no guarantee it will help you make money.

At the end of the day, all investments carry risk. So even though you could do really well for yourself, you could also end up losing money.

Hopefully, that doesn’t happen. But I always think it’s worth understanding the risks and setting realistic expectations before joining something like this. That way, you’re less likely to be disappointed if things don’t go according to plan.

In any case, I hope you found this helpful. And if you’d like to share your thoughts or experience with Sector Focus, feel free to do so in the comments below.